On July 1, 2021, China announced that it had succeeded in building a moderately prosperous society, or Xiaokang, in all respects. In the traditional Confucian sense, Xiaokang describes a state in which, although there are imperfections, everyone is sufficiently provided.

Ensuring that “everyone” is adequately provided is no easy task in China, a country of 56 ethnic groups. Besides the Han, who make up over 90% of the Chinese population, there are 55 ethnic minority groups in the country, each with their own costumes, festivals and customs.

Not a single ethnic group should be left behind, whether it is in the nation’s drive to eradicate absolute poverty, to build a moderately prosperous society in all respects, or to build a modern socialist country, according to Chinese President Xi Jinping.

A fierce fight against poverty in ethnic areas

The 18th National Congress of the Communist Party of China (CPC) in 2012 set the goal of completing the construction of a moderately prosperous society in all respects by 2020, with the eradication of absolute poverty as the most important goal. .

To achieve an overall victory in poverty reduction, ethnic minority areas are the most difficult to resolve. Impeded by historical, social and natural conditions, the economic and social development of many areas of ethnic minorities is lagging behind.

The Chinese government is emphasizing poverty reduction work in poor areas of ethnic minority areas and extending special preferential policies and measures to these areas.

From 2016 to 2020, data shows that the central government allocated 241.52 billion yuan of special poverty reduction funds to eight provinces and autonomous regions belonging to ethnic minorities, accounting for 45.5% of the national total.

Among the 55 ethnic minorities, the 28 smallest with a population of less than 300,000 inhabitants were also not left behind.

The Small Population Ethnic Groups Development Support Program was included in China’s 12th Five-Year Plan (2011-15) with the aim of providing support to compact communities of 28 ethnic groups and focusing on 2,119 villages. .

The efforts paid off. In February 2021, Xi said China had eliminated absolute poverty, lifting all of the remaining 98.99 million rural poor out of poverty.

From 2016 to 2020, the number of poor fell by 15.6 million in the country’s five autonomous regions – Inner Mongolia, Guangxi, Tibet, Ningxia and Xinjiang – and in three provinces with large multi-ethnic populations – the Guizhou, Yunnan and Qinghai, said a white paper released in April by the State Council’s Information Office. The white paper is titled “Poverty Reduction: China’s Experience and Contribution”.

The document said that extreme poverty had been eliminated in the 28 ethnic minority groups with a small population.

Commending China’s achievements in the field of ethnic affairs in recent years, Xi said that the implementation of the regional ethnic autonomy system as a core CCP policy has enabled ethnic minorities to stand up to the challenge. exercise their political rights for the first time in history.

“People of all ethnicities within the Chinese nation should unite closely like pomegranate seeds to strive for common prosperity and the development of a more diverse and cohesive community with a common future,” Xi said. of a rally to honor national models of ethnic unity and progress in September 2019.

“The Chinese nation is closely united like the seeds of a pomegranate.”

This is not the first time he has used the expression to refer to ethnic unity in China, reflecting that ethnic unity is of great importance in the country’s handling of ethnic issues. 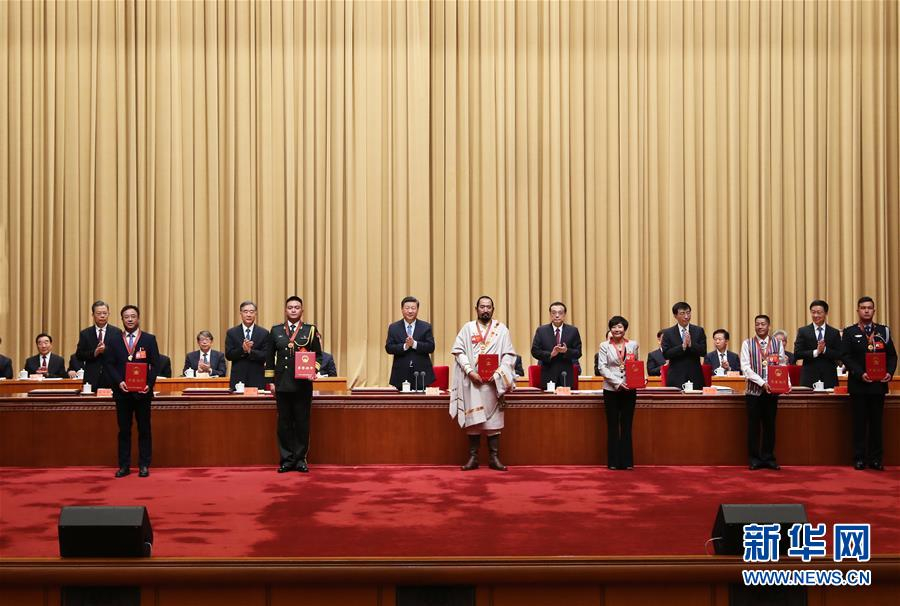 Chinese President Xi Jinping and other senior leaders present awards to representatives of the laureates at a rally to honor national models of ethnic unity and progress in Beijing, September 27, 2019. / Xinhua

Chinese President Xi Jinping and other top leaders present awards to representatives of the laureates at a rally to honor national models of ethnic unity and progress in Beijing, September 27, 2019. / Xinhua

Meanwhile, from 2013 to 2019, GDP and per capita income in urban and rural areas of the eight ethnic minority provinces and autonomous regions grew faster than the national average. Poverty among more than 30 million people has been reduced, with the incidence rate dropping from 20.8 percent to 0.79 percent, according to the country’s Ethnic Affairs Commission.

Looking ahead, as China embarks on a new journey towards the second centenary goal of fully building a modern socialist country, the phrase “not a single ethnic group should be left behind”, which is always reiterated by Xi, will undoubtedly continue to be practiced. .