AMES, Iowa – Mount Rushmore is a symbol of freedom for many Americans, but the monument, located in the Black Hills of South Dakota, has a more complicated meaning for native people.

Throughout the interviews, Gish Hill repeatedly heard from people who would like to see an exhibit in the Mount Rushmore Visitor Center depicting the history and continued connection between the Cheyenne and Arapaho Nations and the Black Hills. Gish Hill says many visitors may not understand the historical and religious relationship that Indigenous people have with the landscape today.

“The Black Hills are an extremely important place, and it’s hard to say how important the area is to the Cheyenne and the Arapaho,” said Gish Hill. “For many indigenous peoples of the northern and southern plains, the Black Hills are sacred because events in their religious narratives and founding histories occurred there.

Native people visit the Black Hills for many reasons, but often to pray and fast. Similar to any religious or spiritual place, they want it to be a place of quiet reflection, Gish Hill said. However, tourism and development have disrupted the way the Cheyenne and Arapaho connect with the landscape. 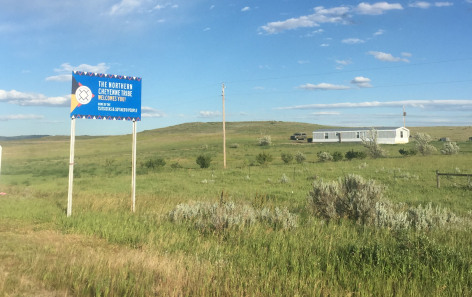 Gish Hill traveled to the Northern Cheyenne Reservation to conduct interviews for the project. Photo courtesy of Christina Gish Hill

Several Indigenous people expressed appreciation for the opportunity to share their views and recognized the challenge of presenting different perspectives, but remained critical of what the monument represents, said Gish Hill. Many have suggested that the Park Service detail the complex relationship between Indigenous people and each president.

“People have expressed concern that Mount Rushmore portrays US presidents in an unproblematic way. Some have noted that glorifying them without acknowledging the challenges posed by US history is a slap in the face, ”she said. “This is really the painful piece for Indigenous people – their painful history with the US government, the theft of the Black Hills and then having this monument that is not only destructive to such a sacred place, but also glorifies the United States. in a very uncritical way. “

The research team submitted their report to the Park Service on July 1. Gish Hill expects some revisions before the final document is presented. She hopes it will eventually be published online, as will a similar report for Wind Cave National Park, to which she contributed.

“It’s really a first step. The document is rich and provides a lot of information from many different perspectives, including the Lakota people, ”said Gish Hill. “I hope this helps people be more connected to a place that is deep to them, and that it will start a difficult conversation about what Mount Rushmore should display as a representation of the United States.”

The final report includes chapters on other issues such as tourism in the Black Hills, the relationship between the Lakota people and Mount Rushmore, and the American treaties. Researchers from the University of Massachusetts-Amherst, the University of Nebraska, and the University of Colorado-Boulder all contributed to the report.

/ Public distribution. This material is from the original organization / authors and may be ad hoc in nature, edited for clarity, style and length. The views and opinions expressed are those of the authors. See it in full here.